When Rabobank decided to shift its head office from Wellington, one city stood out as a natural fit.

“For me, Hamilton has a real can-do attitude in business and I really like that,” said Todd Charteris,​ chief executive of Rabobank New Zealand.

And Rabobank could be the first among a host of businesses looking to base themselves in Hamilton.

About 80 staff are expected to move into the bank’s new offices on Thursday. The head office – named the Rabobank Centre – takes in two floors of the new Union Square building on the corner of Anglesea St and Hood St.

Charteris said the opening of Rabobank’s new head office is a statement about the bank’s identity. Rabobank is the country’s only specialist food and agribusiness bank.

“Waikato stands out as a vibrant food and agricultural region, and it’s also close to other food producing regions,” he said. 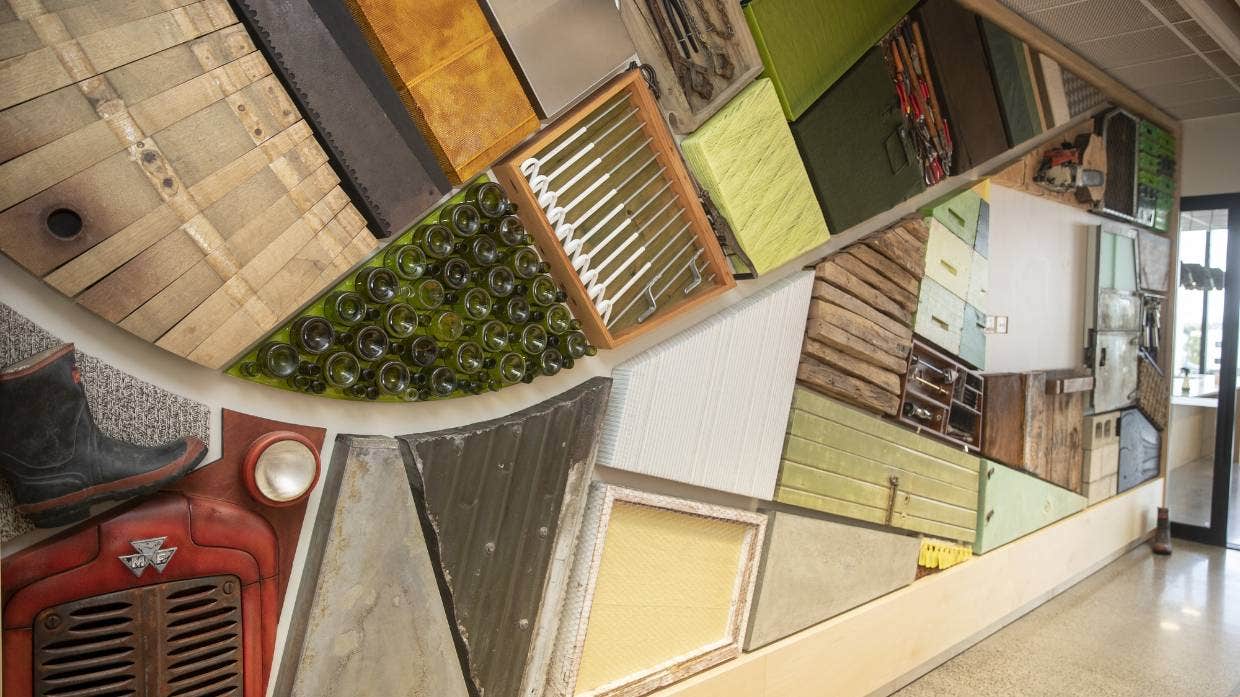 The Down to Earth Wall was commissioned for the Rabobank Centre and features everyday items from rural New Zealand. Image: CHRISTEL YARDLEY/STUFF

The bank previously had about 30 staff based in Hamilton. Its head office workforce is expected to eventually expand to 120.

Rabobank will also retain a presence in Wellington.

“You have a look around Wellington, there are no farmers down there, [and] really no food companies. It served its purpose well, we still have strong connections down there obviously with industry and government. But we just felt we were much better served here to really take our business forward.”

The Rabobank Centre is a bespoke office space, with numerous artworks and decals referencing the bank’s rural connections. 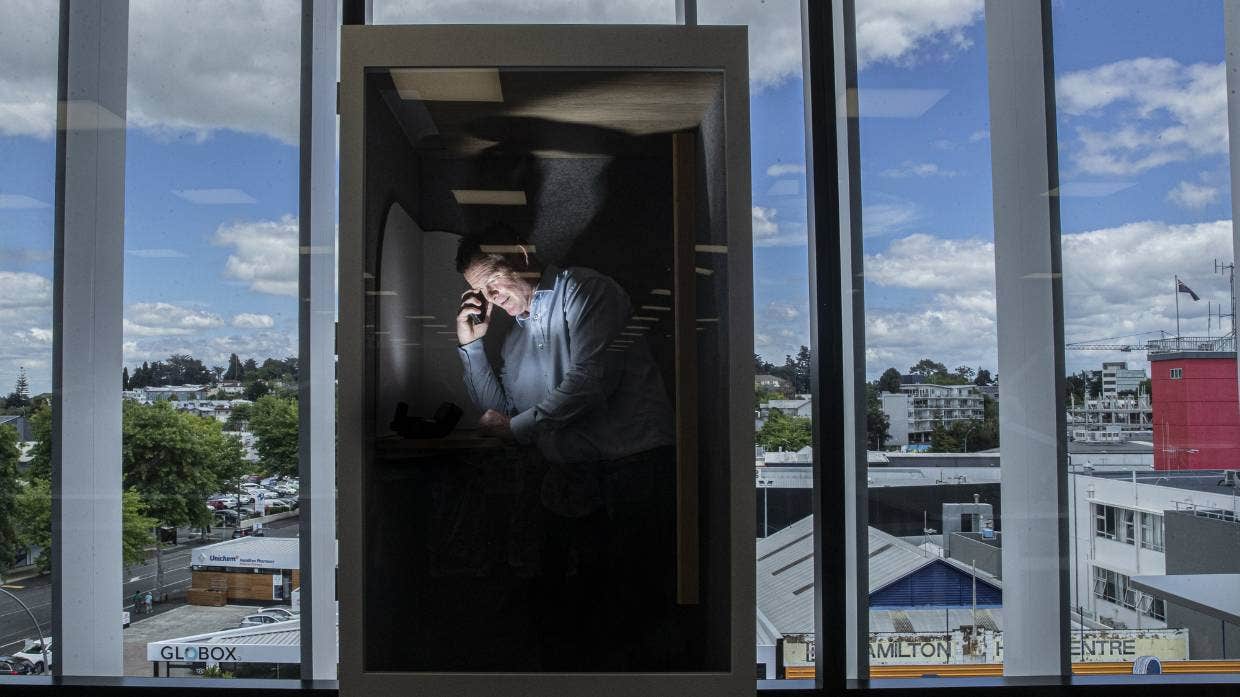 One piece, named The Down to Earth Wall, features everyday farming items arranged in a mosaic-inspired pattern. The artwork is located opposite a large table where staff and visitors can socialise over a hot drink.

“When we go out to see clients, our bankers ... do a lot of business around their kitchen table because we go to where our clients are. What we’ve tried to create here is our own kitchen table. Clients can come and help themselves to a coffee, this is as much their space as ours.

“They’ll also be surrounded by artwork that they can recognise and resonate with.”

Hamilton mayor Paula Southgate​ said the city is attracting the interest of a wide range of companies due to its reputation as a good place to do business. 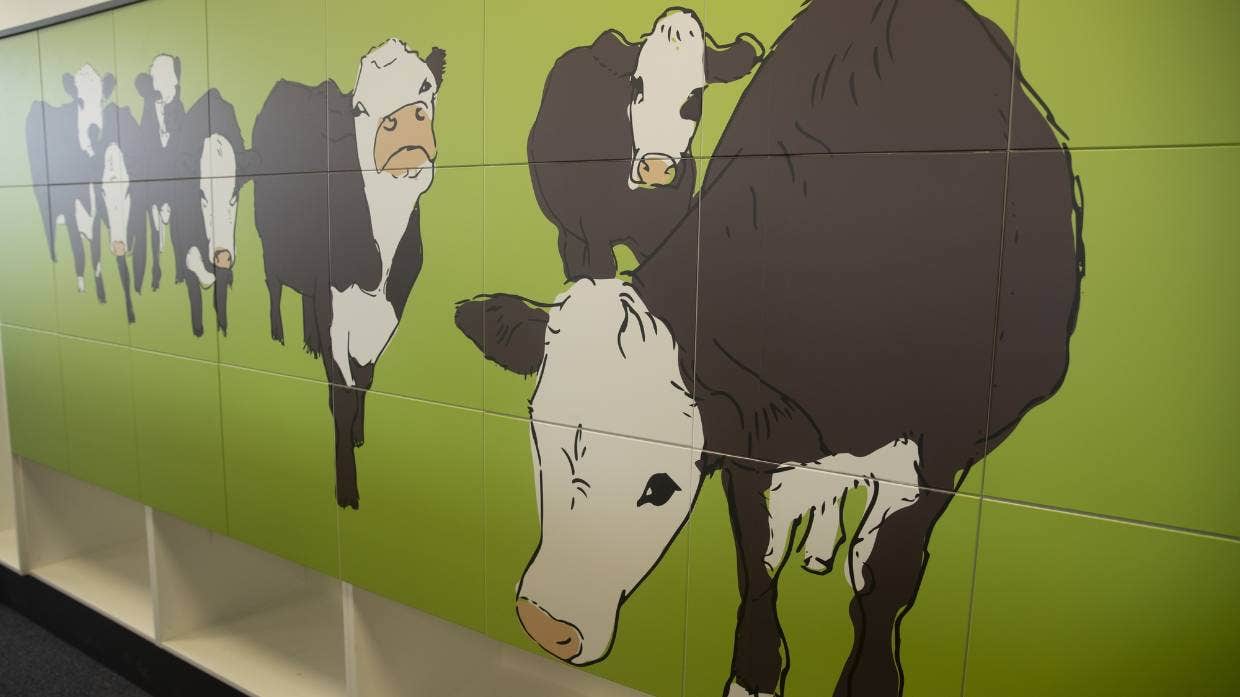 Staff lockers adorned with a herd of cows. Bespoke features inside the Rabobank Centre reference the bank's focus on the food and agribusiness sectors.  Image: CHRISTEL YARDLEY/STUFF

“I can’t go into detail, but we’re talking with companies that are coming from big centres and who are looking to relocate to Hamilton,” Southgate said.

“Our message to businesses ... is if you’re thinking about moving to a modern, thriving city, then come and talk to us, and we’ll see what we can do.”

On Tuesday, the city hosted a sod turning ceremony for the soon-to-be-built Waikato Regional Theatre. Among the invited guests was Prime Minister Jacinda Ardern.

Southgate said the riverside theatre is another example of the central city’s rejuvenation.

“We’re going to see a whole stretch of at least 2km of our central river with vibrant new businesses and activities on them.” 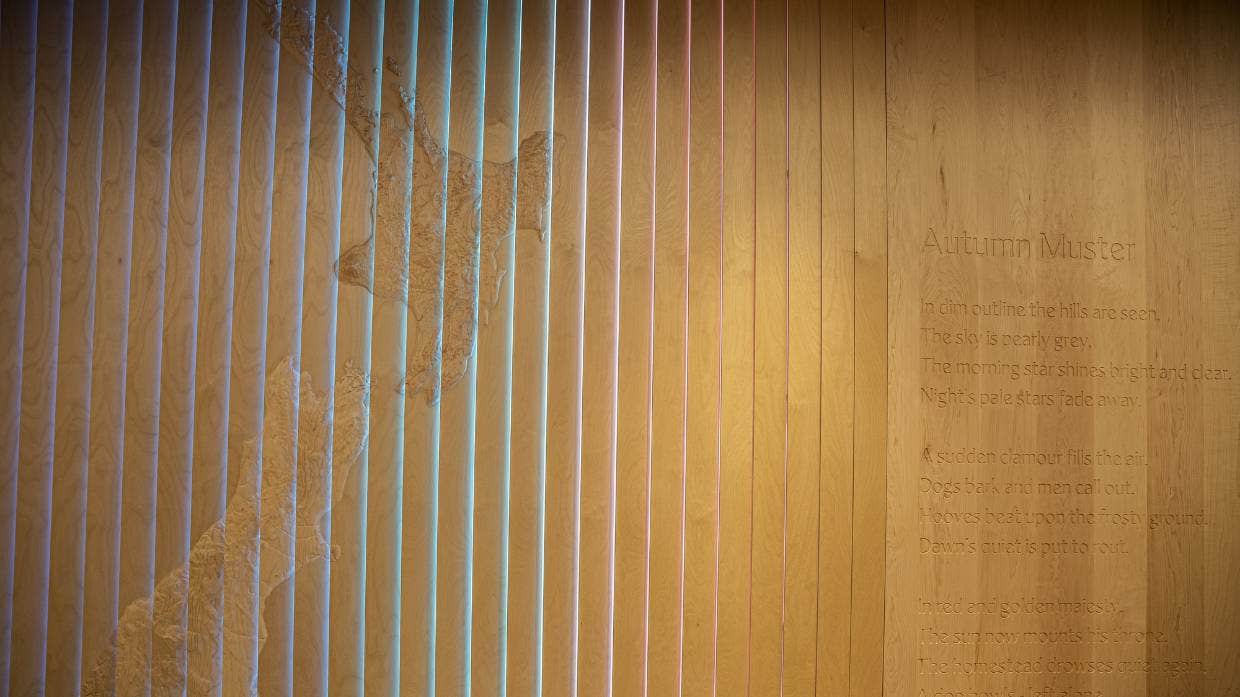 The Dawn Wall artwork is located behind the Rabobank Centre's reception desk. Many of the bank's clients are the first to see the dawn each morning, Charteris says.  Image: CHRISTEL YARDLEY/STUFF

Ardern, who was born in Hamilton and studied at Waikato University, has noticed a “huge amount” of development and beautification in the central city. Recent developments show a deliberate intent to face towards the Waikato River.

“The city has changed a lot over the years, and you can see now almost these precincts that are developing, and I think that lends itself to a real destination.”

Just before Christmas last year, Charteris visited the Union Square site along with Foster Construction Group chief executive Leonard Gardner.​ At that time, about one floor of the five-storey build had been completed.

“The fact they completed the building nine months later is pretty impressive. I think it sums up the Waikato,” Charteris said.

“It’s where things just get done.”