In Charles Dickens’ A Christmas Carol, Ebenezer Scrooge is visited by a series of ghosts who show him scenes from his past, present, and the miserable future that awaits him. Scrooge takes this knowledge as an opportunity to change his ways, and avoid the fate shown to him by the ghost of Christmas yet-to-come. If only we had such guides to show us how to act now.

Being an economic forecaster is a fraught business at the best of times. In ordinary times, if you want to see one squirm, go back a year or two and look at what they were saying then about what would be happening now, and ask them how their predictions are faring. But these are not ordinary times.

History in the making
In 2020, New Zealand experienced what may be our sharpest economic shock ever, going into lockdown as a nation at the end of March. But this was not like other recessions. Rather than an accumulation of imbalances or policy mistakes causing the machinery of the economy to seize, this time we effectively just turned the machine off for a while. The public and political consensus that, along with a good dose of luck, has underpinned New Zealand’s pandemic response meant that the period of lockdown was relatively short and, as this week’s national accounts show, when the machine was turned on again, economic activity came roaring back. 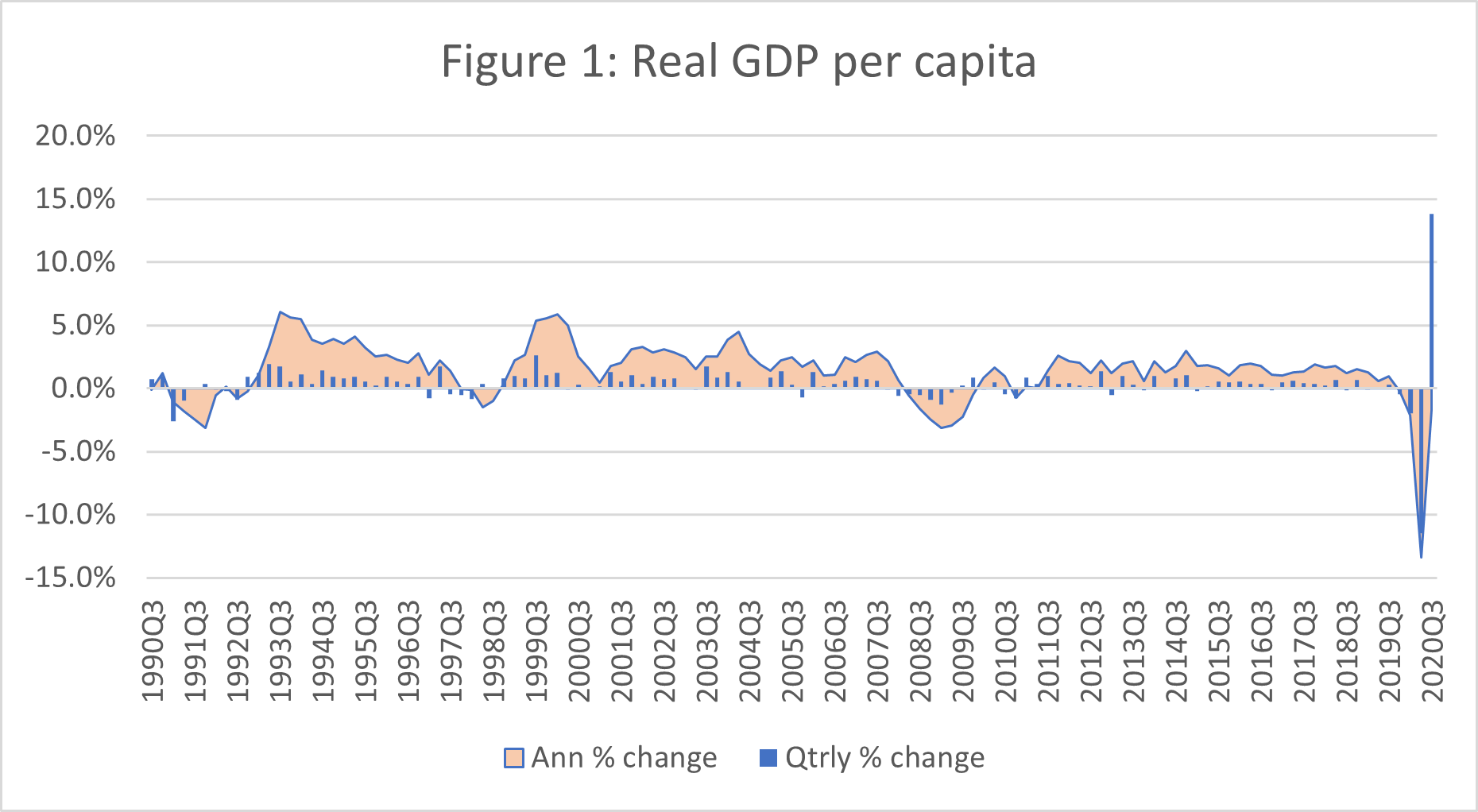 After the 12 percent fall in the June quarter, real GDP per person rose by nearly 14 percent, and now sits at a level just two percent lower than the September 2019 quarter. Most of the growth in the September quarter was in the services sector, reflecting both the fact that it makes up about two-thirds of GDP, and also that it fell the furthest during lockdown.

The construction industry recorded the largest individual increase from quarter to quarter – up more than 50 percent – and made up one-fifth of the total quarterly increase in GDP. The retail trade and accommodation sector was the next largest contributor (19 percent of the quarterly increase), followed by manufacturing (12 percent). 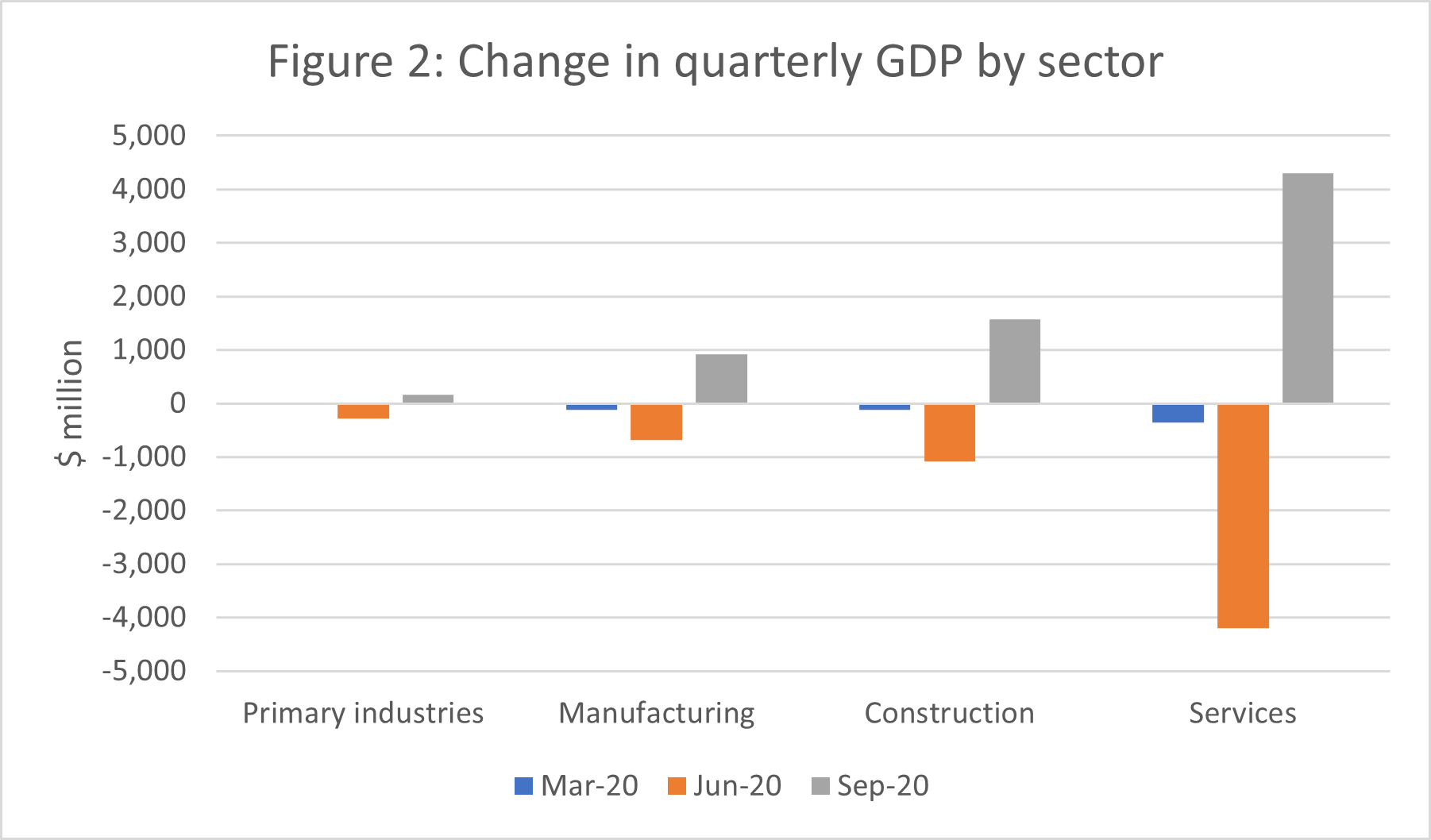 Here in the Waikato region, retail sales jumped 34 percent in the September quarter (following a 17 percent drop off in the June quarter) and was 12 percent higher than a year ago. Similarly, building activity, having fallen by 20 percent in the first half of 2020 rose by 35 percent in the September quarter to record levels well above those in 2019 (which were, themselves, records). Exports volumes remain strong for some of the Waikato’s key primary products (although export prices dropped – more on exports later).

Of course, turning the machine off had consequences – many businesses and jobs have been lost. And for some – mostly those dependent on international travel – the ongoing border restrictions mean an ongoing struggle. For the Waikato Region, the relative importance of domestic tourism has helped to plug the gap – and in fact, total tourism spending in the region was up slightly in October 2020 compared to October 2019.

While unemployment has risen, it has not done so nearly as much as might have been expected. Indeed, in the Waikato region, the unemployment rate has remained below 4 percent even into the September quarter, while it ticked up to 5 percent for New Zealand as a whole (see figure 3). This has largely been thanks to the response of the government through wage subsidies and other policies to assist businesses through the lockdown. 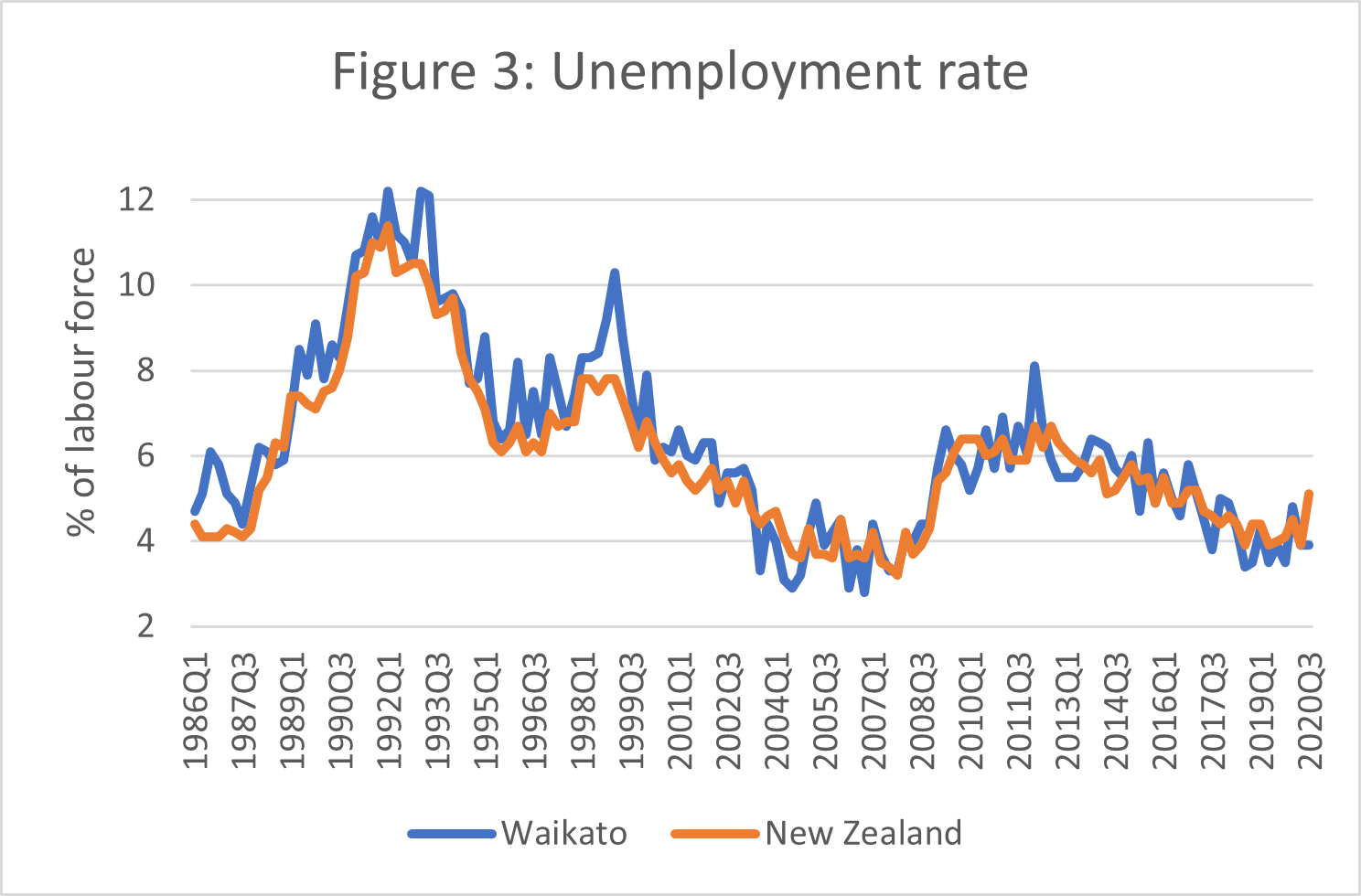 The Waikato has 5,500 more people registered for Jobseeker support than it did at the beginning of 2020 and we should not be surprised to see the unemployment rate increase in the December quarter and into 2021. Underutilisation of labour – where workers have jobs, but would like to work more – has also risen. But so far at least, we’re not even close to the rates of unemployment seen in the recessions of the 1990s, nor to that seen in the wake of the global financial crisis.

So, what next?
As figure 4 shows, economists’ forecasting models of the implications of the pandemic and the lockdown have not fared particularly well. Treasury’s March 2020 forecasts shown in figure 4 below was actually its most optimistic scenario at that time that did not assume large amounts of additional government spending. 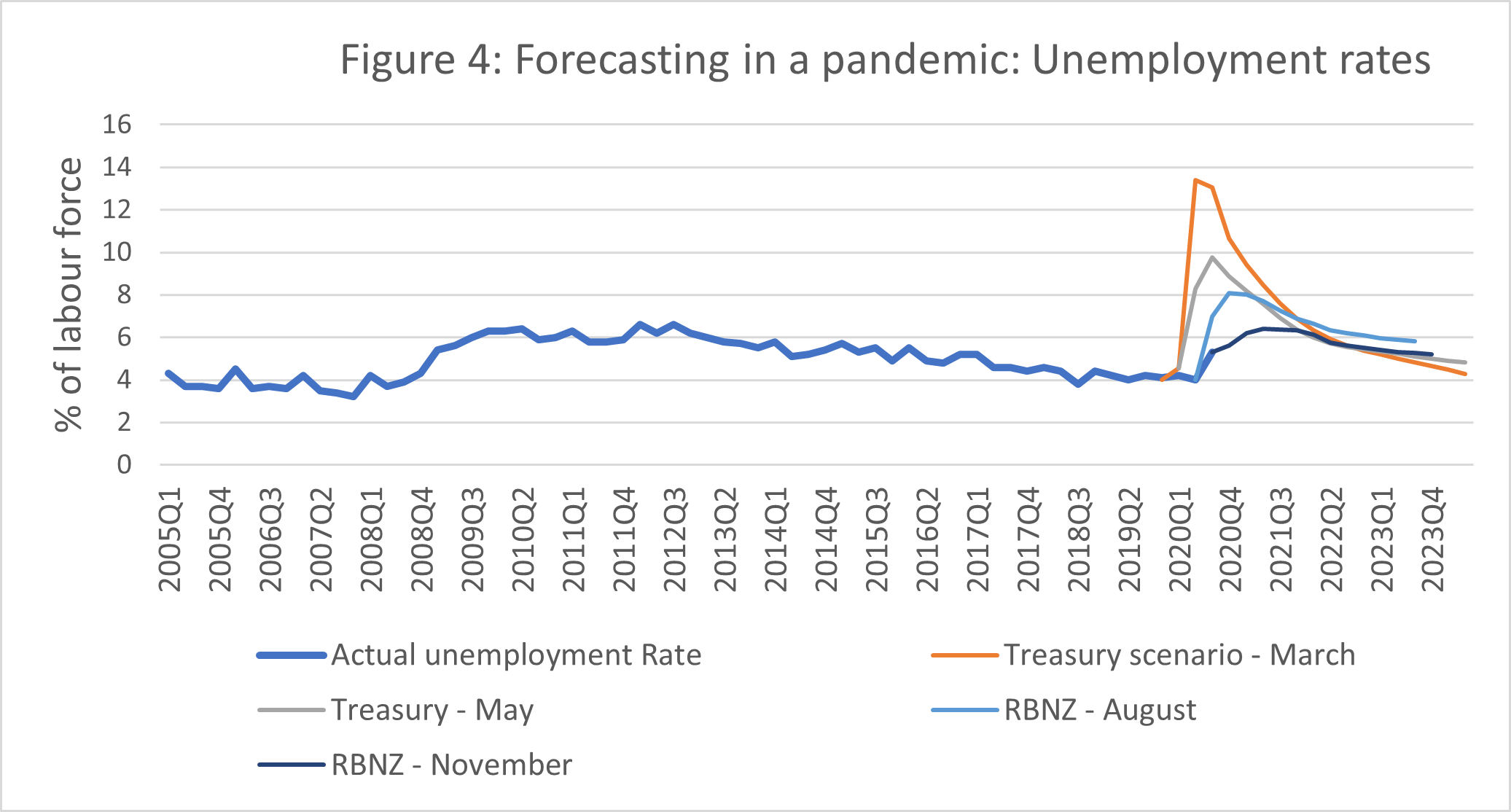 While the precise numbers in these early forecasts have proven inaccurate, perhaps they should be seen as our version of Scrooge’s ghostly visions. The policy recommendations of fiscal stimulus, business and job support have worked well, and in fact, are a large part of the reason the early forecasts did not come true.

While we may not be very good at forecasting when economic shocks will come, we do know that they will happen, if not when. Geologists knew the risks of a major earthquake in Christchurch – even if we mostly chose to ignore it; Public health experts warned that the next pandemic was a matter of when, rather than if; We know the risks of climate change are potentially catastrophic. The question is what to do about it.

Risks to watch for in 2021
So before we congratulate ourselves too much on successfully navigating 2020, what should we be looking out for in 2021?

Global weakness
While we’ve done well in our New Zealand bubble, the rest of the world is still challenged, and has not fared so well. For now, our merchandise exports (as opposed to our tourism exports) have held up well. While they have been tracking slightly lower than 2019 (see figure 5), this could arguably be a slightly delayed seasonal pattern, and they remain strong compared to the preceding years. A weak global economy might make life more difficult for exporters where in the September quarter, export volumes rose 5.6 percent, but prices fell by 8.3 percent. The relatively strong New Zealand dollar will not help this. 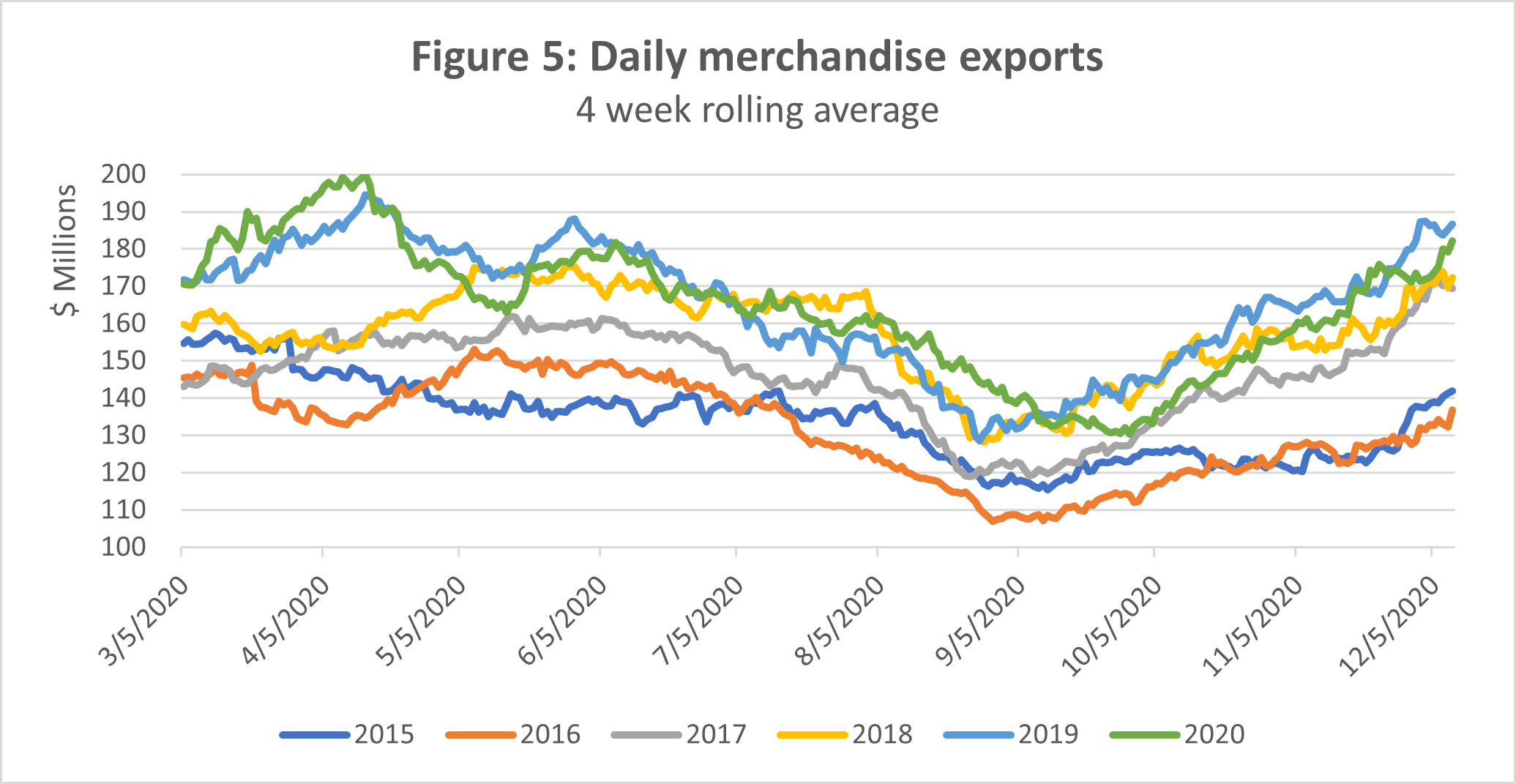 We have also learned lessons about our dependence on global supply chains. Many businesses that focus largely on domestic markets had to adapt to disruptions to imports of key inputs. There may be valuable changes that enable us to manage future such disruptions from whatever source they may come. Amongst other things, it has highlighted the pitfalls of our dependence on international labour supply in some sectors, and suggests we need to reexamine how we develop human capital in New Zealand – through training, education and workforce development.

Inflation or deflation
Some commentators have expressed fears that easy monetary policy from the Reserve Bank will spark a sharp rise in inflation. Others have noted that the fall in aggregate demand means that there is a risk of deflation. There is, as yet at least, little sign of generalised rising inflationary pressures. But how should the Reserve Bank – which has responsibility for managing inflation – respond, given these two potential risks would demand opposite policy prescriptions?

The Reserve Bank’s own estimates in November suggest consumer price inflation will remain below the two percent midpoint of its target for several years to come – but there is certainly plenty of room to raise interest rates, should signs of significant inflation appear. On the other hand, raising rates too soon would risk tipping the economy back into recession, and there appears to be a lot less capacity to prevent deflationary pressures getting out of hand. (In fact, former Reserve Bank economist, Mike Riddell argues that not nearly enough has been done to ease monetary policy in response to the current situation).

Asset prices
While there is no sign of general inflationary pressure, there certainly is in the housing market. REINZ’s November report.pdf shows median house prices have risen by 18 percent in the past year (13 percent in the Waikato region).

REINZ Regional Director, Neville Falconer notes that “First home buyers are struggling to find property they can afford and are finding it difficult to compete against investors who are opting to invest their money in property while interest rates are low. As prices are rising nationally, there has been an increase in out-of-town investors, particularly from Auckland as prices in the Waikato are comparably more affordable.” As noted earlier, record levels of residential construction might provide some relief, but for various possible reasons, the supply of new housing remains slow to respond to demand in the current environment. 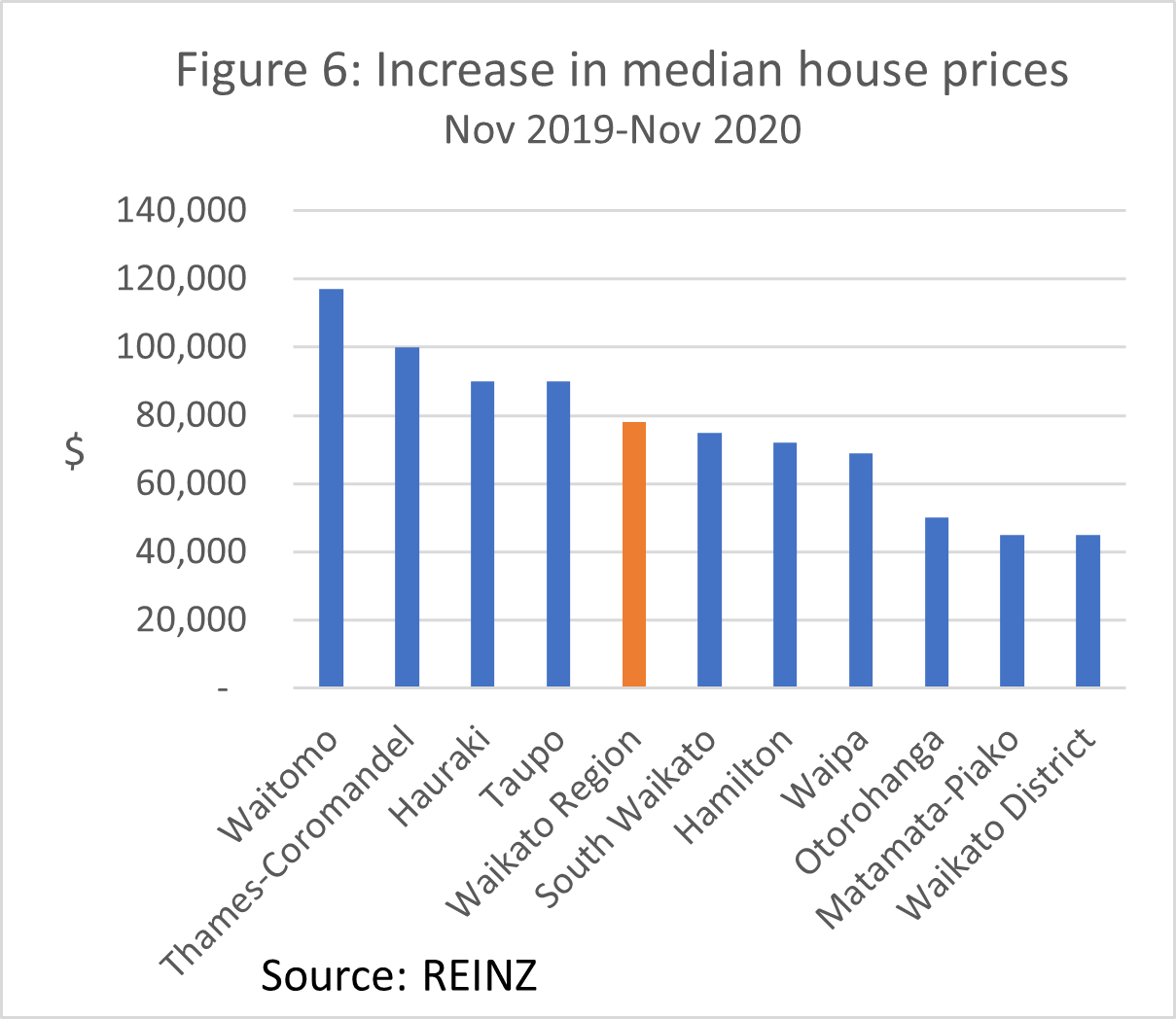 Other asset prices have shown some signs of life. The NZX 50 share index fell sharply in March, but has risen by 50 percent from its low point. That mostly reflects a recovery, however, with the index only sitting seven percent higher than its previous high in February. Capital goods price indices show no real sign of taking off. At this stage, house prices are perhaps the main imbalance with potential to cause a macroeconomic headache. (Which is not to say that the escalation of house prices isn’t creating serious hardship for many people around the country, and it is one of the most important policy issues the government needs to address).

Black swans and rainy days
Perhaps, after the year we’ve just had, we should expect the unexpected. Even if we don’t know what form the next crisis may take, we can take steps to be ready. Thanks to fiscal restraint by successive governments over the last 20 years, New Zealand entered 2020 with its public finances in good health and the government was able to use its fiscal resources to bridge the gap in economic activity over the lockdown period. So when should the government start saving for the next rainy day?

Net core Crown debt was very low by international standards at 18.6 percent of GDP in 2019, although is forecast to rise to 52.6 percent in 2023. Even this debt level is lower than many developed countries went into the pandemic with. If the international experience of the austerity in the wake of the global financial crisis taught us anything, it was that trying to cut deficits before the economy is back on an even keel can do more harm than good.

It took the Ghost of Christmas yet-to-come to show Scrooge the plight of Tiny Tim Cratchit, who would die in poverty without help. We don’t need a ghost to show us that the risk of the pandemic to businesses and jobs is still high, and along with the housing crisis, child poverty and the like, the costs of premature austerity would be borne by those least able to manage them.