The size of the Covid-shock to the Aotearoa-New Zealand economy became a little clearer today, with the release of the national accounts for the June 2020 quarter. This showed gross domestic product (GDP) fell by 12.2 percent (seasonally adjusted) from the March 2020 quarter, and was 12.4 percent lower than the June 2019 quarter. This is by far the largest quarterly fall recorded in this country, and reflects the lockdown under Alert level 4 which began at the end of March. 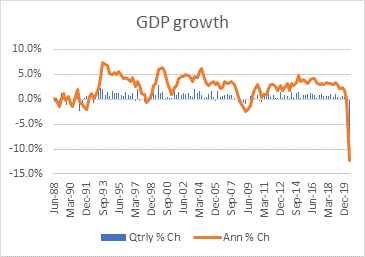 The agriculture sector, which contributes a relatively large share of the Waikato economy (around 10 percent, compared with around 4 percent for the national economy as a whole), was relatively stable, down just 0.4 percent for the quarter. This reflects that fact that farming was, to a large extent, able to carry on through lockdown, and export volumes and prices have held up well. This also showed in the manufacturing sector: while some subsectors were down by as much as 38 percent on the previous quarter, the food, beverage and tobacco subsector declined by only 2.2 percent, limiting the decline in the overall sector to 13 percent. 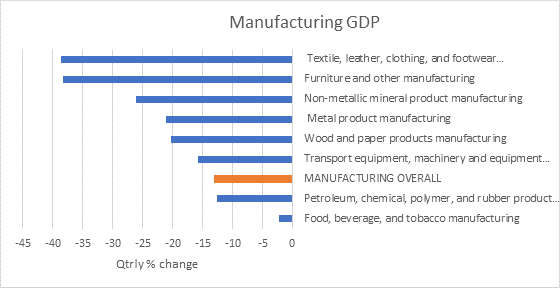 Parts of the service sector (which makes up the largest share of the economy) were relatively unaffected, either because they represented essential services (such as with the health sector) or because they were largely able to continue to work remotely. 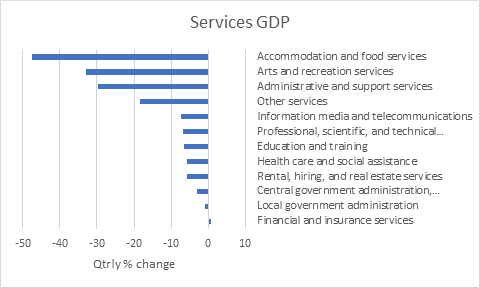 However, some service sectors were particularly severely hit; the single largest fall in any sector was for accommodation and food services – down 47.4 percent nationally. This reflects not just the Alert level 4 lockdown, but travel restrictions and the closure of borders that resulted in large parts of the tourism sector effectively shutting down. This also shows in the retail trade sector, where activity declined by 15.8 percent in the quarter.

Measured by expenditure type, the fall in private consumption was the largest contributor to the quarterly decline, followed by the decline in private investment (shown as ‘gross fixed capital formation’ on the chart below). There was also a continuation in the pattern of destocking seen in the March quarter, as supply chains were disrupted and inventories run down. (this counts as a negative, since the pre-existing stocks that were sold were attributed to a previous quarter).

Government consumption was largely steady (central government was up 1.9 percent, while the much smaller local government was down 0.2 percent). The largest positive effect was a reduction in the drag of net exports on GDP. However, this reflected a particularly sharp drop in our expenditure on imports – down by 25 percent (seasonally adjusted) on the previous quarter, outweighing a 16 percent fall in exports – hardly a reflection of economic strength. 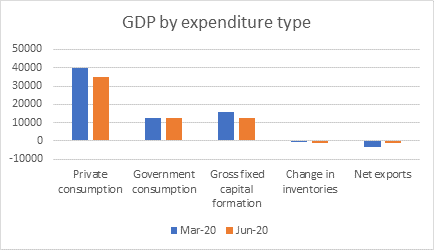 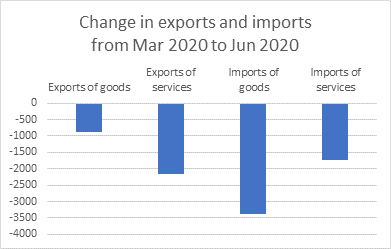 Blair Keenan has an undergraduate degree from the University of Otago. Keenan worked at ANZ as a macro-economist and industry analyst for five years before heading overseas as a researcher for Japan’s External Trade Organisation in the UK. While in the UK, he also received his Master’s degree in applied environmental economics from the University of London and was an economist at the National Farmers Union of England and Wales. Back in New Zealand, he held several policy roles at Landcare Research, Department of Internal Affairs and Housing New Zealand before his current role as principal economist at Waikato Regional Council. He also continues to collaborate on projects with the University of Waikato, CRIs, central and local government, and a variety of industry groups.